The buildings of tomorrow are powered by solar energy

In Norway, as well as in most countries, buildings account for about 40% of the energy use. By making buildings more energy efficient, we can significantly reduce the global energy demand. The European Union has set ambitious goals for its member countries. In the Energy Performance of Buildings Directive (EPBD), it is declared that “by 2020, all new buildings shall be nearly zero energy buildings” (European Parliament 2010).

Nearly zero energy buildings are very energy efficient buildings that generate most of the energy they need from renewable energy sources on the building itself or nearby. That is, a building that by 2020 all new buildings in the EU will be small-scale power plants.

So how can buildings generate energy? The most obvious answer is: by using solar energy. In fact, it is almost impossible to build a zero energy building without it.

The sun provides us with abundant and free energy. In one hour, the Earth receives more energy from the sun than the global population requires in a whole year. Although the resource is not evenly distributed around the globe, solar energy can make an important contribution to the energy balance in most countries. (Metz, Davidson et al. 2007)

Whether we designed them for it or not, all buildings use solar energy. Passive solar energy provides heat and daylight through windows and building envelope. If it is used as a design tool, passive solar can reduce the energy demand of a building significantly. In a zero energy building, active solar energy systems can provide electricity, heating and cooling.
Solar energy systems are silent, have no moving parts and require no fuels. Once installed, they require minimum maintenance, and can deliver energy for at least 25 years. In addition,

solar cells (that generate electricity) and solar collectors (that provide heat) can be used as building materials, replacing roof tiles, façade cladding, solar shading or other building elements. Such systems are called building integrated solar systems. As more and more products are developed for building integration, they are also becoming more attractive for architects to use as design elements.

An important reason for integrating or adding solar energy systems to buildings is that the buildings are already there. There is therefore no need for additional mounting structures, ground work, or new roads. Generating energy where it is used also limits the demand for large transmission lines or other energy infrastructure, and reduces the transmission losses. In essence, buildings are solar energy systems waiting to be built.

Solar energy systems can be installed on both new and existing buildings. For new buildings, it is important that solar energy systems are planned from the start, and that the engineers and architects work together. Designing for solar energy can involve simple things, like making sure that the building has an available area with a favourable orientation and that unnecessary shading is avoided. The design also needs to be adapted to the location. For example, due to the relatively low height of the sun above the horizon, solar energy installations on façades are an interesting alternative in Norway.

It is a common misconception that the solar energy resource in Norway is not large enough for solar energy utilization. Indeed, at this time of year it may be hard to imagine, but solar energy can make a significant contribution to the energy balance also in Norway. An optimally oriented surface in Oslo receives around 1000 kWh/m2 per year. This is comparable to many parts of Germany, which is the world’s largest market for solar cells.

The challenge in Norway is not the amount of the solar resource, but is variation over the year. Most of the solar energy is available in the summer, while the largest energy demand occurs in winter. Both system design and storage strategies are therefore important. Solar heating systems can store energy over a few days in water storage thanks, and seasonal storage in bore holes are a developing technology. Grid-connected solar cell systems use the electricity grid as large energy storage, exporting the energy in the summer and importing it in the winter. However, the development of solar buildings should be connected to the development of energy storage, smart grids, and smart house technology.

In Norway, buildings use 90 TWh per year, most of which is electricity. By a combining energy efficiency measures, integration of solar energy, and smart house technology, a significant amount of this energy would be available for other uses, such as electric cars, industry, or export.

The Norwegian market for solar energy installations is still small, and the number of companies limited. While the price of solar modules is at a record low, this makes the cost of installations high compared to our neighbouring countries. Enova supports the installation of solar collectors with up to 10 000 NOK, but there are no economic support schemes for solar cells. Based on experiences from Sweden, Denmark and Germany, the Norwegian Solar energy Association has suggested the introduction of an investment support of 40%, to increase the market size and reduce the cost of installations (Norsk Solenergiforening 2013). 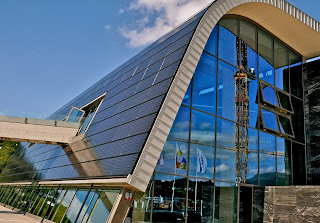 Today, there are still few examples of solar energy installations on buildings in Norway, but the market is starting to grow. Some exciting projects have realized recently, such as the Oseana Cultural Center in Os (figure).  This week, on December 3, 2013, Norway’s largest solar energy system so far will be inaugurated: Norway's largest solar energy system.
The 470 m2 system at Hedmark University College is estimated to generate 64 MWh of electricity per year. By next year though, it will be surpassed by the solar cell system on Powerhouse Kjørbo, which will provide 200 MWh electricity per year: Power house Kjørbo.

The future looks bright. The buildings of tomorrow will be powered by solar energy, also in Norway.

European Parliament (2010). Directive 2010/31/EU of the European Parliament and of the Council of 19 May 2010 on the energy performance of buildings. Directive 2010/31/EU. The European Parliament and the Council of the European Union. Brussels.
Metz, B., O. R. Davidson, et al. (2007). Contribution of Working Group III to the Fourth Assessment Report of the Intergovernmental Panel on Climate Change, 2007. Cambridge, Cambridge University Press.
Norsk Solenergiforening (2013). Etablere markedet for solfangere og solceller i Norge gjennom 40 % investeringsstøtte. Online: http://www.solenergi.no/wp-content/uploads/2013/09/Hvorfor-40-prosent-investeringsst%C3%B8tte-for-solenergi.pdf.